In his feature entitled "Einsamer geht's nicht" (complete isolation) and published in FOCUS Magazine, Mr. Stefan Ruzas described a unique feeling and a sense of solitude, peace and extreme isolation which can be experienced by the visitors to Palagruža who decide to spend their holiday in a lighthouse. Lighthouse keepers, who talked about their life and work, kept the journalist’s company. Vivid colors and motives of the photographs further conveyed the atmosphere, further contributing to the value of the text. Focus is one of the most important news magazines in Germany read by the estimated 5.5 million people. The travel section is featured in the May and September editions of the magazine. The author (b. 1968), works in Munich as a deputy editor of culture and life section in the editorial office of FOCUS. 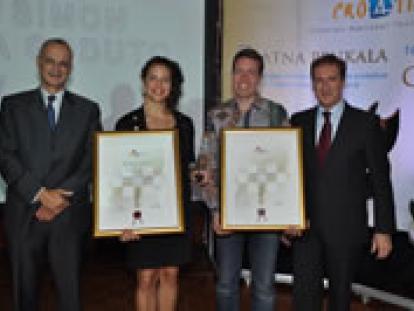 Mr. Andreas Simon and Mrs. Giuseppina Goduto have been awarded for the show "Nick in Dubrovnik," which promoted Dubrovnik and was aired on the second channel of the German public television ZDF. The editorial office of WISO sends its favorite presenter, Nick Benjamin on various city breaks in major world capitals, for two days (1 night), with only 150 Euro in his wallet. In the program entitled "Unterwegs myth 150 Euro ", which was aired on 17 July 2011, Nick took the viewers on a tour of Dubrovnik's sights – a cable car to Mount Srđ, Ragusa 2 restaurant for a tasting of Dubrovnik specialty - rožata, a walk along Stradun and the city walls, a cool drink and a beautiful view from the Buza Bar and to the iconic jazz bar Troubadour for the evening entertainment. The sightseeing tour of Dubrovnik continued after an overnight stay at Kompas Hotel. It was followed by the lunch at tavern Arsenal and a short trip to the islet of Lokrum. Andreas Simon is the founder and designer of numerous news and entertainment shows like the "Wirtschaftswunder", "Dr.MagLove" and "Sparschwein Rüdiger" (the first video podcast of the news channel of ZDF). Since 2008 he has regularly worked as a director of videos for a talent show searching for young songwriters, "Dein Song". As the author of the news program "Wirtschaftswunder" he was awarded for the best innovation of ZDF in 2006. In 2004 he received an award for a short film "Puzzled" at the Trigital Film Festival held in Graz. In addition to being the co-author of "Nick of Dubrovnik", Giuseppina Goduto, also works as the script writer for the same program and directs other travel shows in the same series. She is also a script writer and director of various other news programs of the Channel 2, of the  German public broadcaster ZDF.