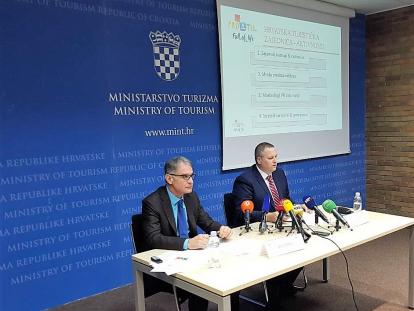 According to the data provided by the eVisitor system, which includes the tourist traffic recorded in commercial and non-commercial objects and in the boat charter sector (eCrew system) from January to the end of December of the tourist year 2017, 18.5 million arrivals were recorded (+13%) and 102 million overnight stays (+12%). These are historic results regarding tourism for Croatia which has reaffirmed its position this year as one of the most popular tourist destinations which attracts an ever increasing number of guests during all parts of the year.

The Minister of Tourism Gari Cappelli and the General Director of the Croatian Tourist Board Kristijan Staničić are pleased with these results, they announced a stronger development of all-year-round tourism in 2018 which is based on sustainable development and destination management.

“The results regarding tourism for the year 2017 and especially during the pre-season and post-season are the best indicators for how key positive steps can be made in a short period. Exactly this is the reason why also in 2018 we plan to work on improvements in order to position Croatia as an all-year-round destination, and thereby enable more competitive business activities in tourism, further investments, better conditions for tourism employees and to achieve an additional incentive for the Croatian economy. Along with key legislative changes and through other programs and activities of the Ministry of Tourism and the Croatian Tourist Board, I believe that the year 2018 will be extremely successful and that we will create new foundations for further development of tourism in Croatia”, stated Minister Cappelli.

Director Staničić stressed the importance of maintaining positive trends in this year “The Croatian Tourist Board will conduct a series of activities during 2018 with the goal of achieving an even more efficient promotion on different markets all around the world, and improving cooperation with foreign emissive markets. The emphasis will be on further expansion of programs and the introduction of new air routes. I am certain that the Croatian tourist sector will once again give its immeasurable contribution which is every year increasingly richer content-wise and more competitive. Today, Croatia is a very interesting and popular destination for tourists as well as for business subjects, and in order to sustain their interest we must maintain this positive atmosphere and growth trends,” concluded Director Staničić.

The Croatian tourist offer in this year will be presented on 26 tourist fairs which will be attended by the Croatian Tourist Board. Nine of them are specialised fairs which focus on the nautical and camping offer and congress venues, while the new visual concept and the new creative design of the booth will be presented for the first time on the ITB fair in Berlin in March. The goal is to achieve even better results on certain markets. The plan is to expand the existing tourism network by opening new offices in China – Shanghai, South Korea – Soul, USA – Los Angeles and Italy – Rome.

Record-breaking year in terms of arrivals and overnight stays

Tourism revenues during July, August and September of 2017: increase of 9.8%

According to the data of the Croatian National Bank (HNB), in the first nine months of the year 2017, the revenue generated from tourism amounted to EUR 8 billion 724 million, marking a growth of 10% or EUR 822 million, compared to EUR 7 billion 902 million generated in the same period of the previous year.

In the third quarter – July, August and September of 2017, the revenue generated from international guests amounted to EUR 5 billion 992 million, marking a growth of 10% or EUR 533 million, compared to the same period of the previous year (EUR 5 billion 459 million).

In the first nine months, the share of income from travel – tourism in total GDP in current prices was 24% which is by 0.9 percentage points higher than in the same period of the previous year.