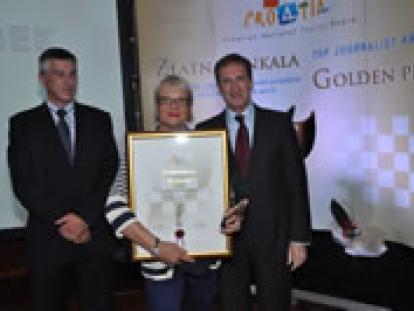 Ms. Duša Podbevšek Bedrač has been awarded for her report "Doživite neandertalce in veliki pok" published in the journal Hopla. The article was created after her visit to Croatian Zagorje, Lika and Rijeka, which were described as "a new mosaic within the great mosaic of beautiful Croatia". This Ljubljanian started her professional career in tourism as early as the first year of university at the Faculty of Journalism, when she worked part time as a tour guide. Soon she came to fame as a journalist "who knows all about tourism" and was chosen to be a permanent member of the Tourist Association of Slovenia as well as being active in the global federation of tourism journalists - FIJET. She wrote about tourism in the daily Dnevnik for a number of years and when a new weekly magazine Hopla started coming out 15 years ago she became one of its editors. According to the latest research, journal Hopla is equally read by men and women under 50 and is read by about 75 000 readers. The journal tackles current weekly affairs in an interesting and relaxing way, its subjects ranging from political and social issues to tourism issues.