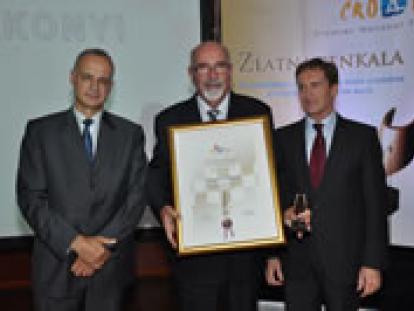 Mr. Botond Zákonyi, journalist and editor at a private television station "PV TV" received the award for a film about Kopački Rit lasting 25 minutes, recorded on a study tour in Slavonia and Baranja. The film was aired 69 times in 2011 and 2012, and it is planned to run on "PV TV" until the end of 2012.  This is a private cable television, specializing in hunting and fishing. Except in Hungary, where it is available in 1.1 million households, the synchronized or subtitled version  of this channel can be seen in 4 million households in Romania, 150 000 households in Bulgaria, 340 000 in Slovakia, 300 000 in the Czech Republic and about 200 000 households in Serbia. This means that as many as six million homes were able to see the film about Kopački Rit. In addition to "PV TV" Mr. Zákonyi published contributions about Kopački Rit in magazines "Sporthorgász" and "Magyar Turista". Mr. Botond Zákonyi is a famous and renowned Hungarian journalist, editor and author of several award winning films and books. He edited several newspapers, magazines, and television programs.