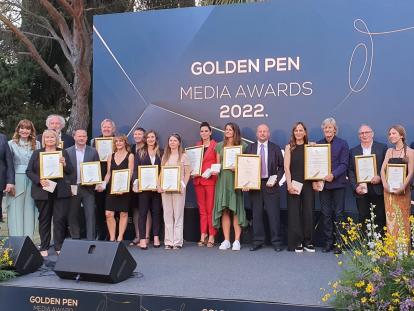 In the beautiful ambience of the Meštrović Gallery in Split, the prestigious "Golden Pen" awards were presented tonight for the 18th time by the Croatian National Tourist Board to journalists, bloggers and influencers for the best publications on Croatia as a tourist destination in 2021. The award ceremony was attended by 17 foreign journalists from 14 countries.

"The past two years have been very challenging for all of us. However, despite all the difficulties, Croatia has shown its strength and achieved the best tourist result in the Mediterranean. This means that Croatia has a very positive image in the tourism market, which is, among other things, the result of well-written coverage, recommendations and impressions of many journalists, bloggers and influencers who have stayed in our country. By awarding these prizes, we would like to thank them for their exceptional contribution and the promotion of Croatia, but also to show respect for their work, profession and loyal audience that accompanies them", said CNTB Director Kristjan Staničić.

"We are extremely glad that our county is the host of this year's Golden Pen and that we had the opportunity to host the best journalists, bloggers and influencers who stood out for their publications about Croatian destinations last year. This was also an opportunity to show them part of our overall tourist offer, and they will certainly remember the magical evening in Split and the atmosphere prepared by the football fans," said Deputy Prefect of Split-Dalmatia County Stipe Čogelja, while director of the Split-Dalmatia Tourist Board County Joško Stella expressed great gratitude for the exceptional contribution to the promotion of the county as an attractive and quality tourist region. "I believe that journalists, bloggers and influencers will return to their homes full of good impressions, and that this stay in our country will motivate them to come to Split-Dalmatia County once again because they have much more to see", concluded Stella.

This year's winner of the Grand Prix for the best article in print/online media is Hungarian journalist Mr. Zoltán Szántó, whose report describes his stay in the Split-Dalmatia County with beautiful descriptions and personal experiences of Split, Brač, Klis and their attractions. The article was published in the print and web edition of Turizmus magazine, which is the most important B2B magazine in Hungary.

Ms. Valeria Cagnoni and Mr. Ernaldo Emerson Gattafoni from Italy won the Grand Prix for the best TV/radio report. These are the authors of a special 40-minute report on Croatia broadcast on TV RAI 1 as part of the award-winning television travel show Dreams Road, one of the most important and successful television series on travel and tourism in Italy in the last 20 years.

The winner of the Grand Prix for the best travel blog or post on social media is Ms. Antje-Katrin Schaniel, an influencer from Switzerland who is behind the Instagram profile of Senza Camedi, who specializes in the most beautiful places and the best food of every culture. During her stay in Croatia, Antje visited Opatija, Krk, Rab, Lošinj and Cres.

During the award ceremony, all guests were entertained by the klapa Cambi, while gastronomic specialties were prepared by the famous Split chef Hrvoje Zirojević, who on this occasion brought foreign guests closer to the tastes of the Dalmatian region. The best Croatian bartender Jure Vojković was in charge of refreshments, who designed three cocktails for this special occasion, "Golden Pen", "The Heart of Adriatic" and "Alkar". Designer and artist Ms. Dina Jakšić, the author of a valuable statue made of Brač stone, which she specially designed and made for this occasion, made sure that this award was remembered fondly.

In addition to the Croatian National Tourist Board as the main organizer of the event, this year's partners and hosts are the Split-Dalmatia County Tourist Board and the Split Tourist Board, who prepared a rich program for guests that included a tour of Split, Brač and Sinj. 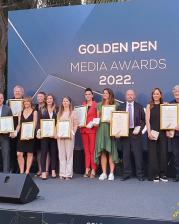 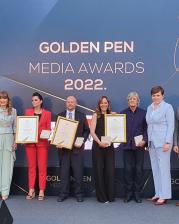 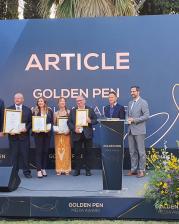 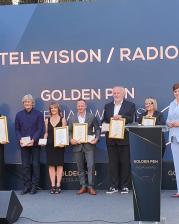 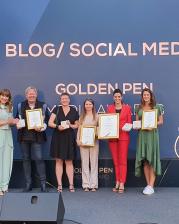 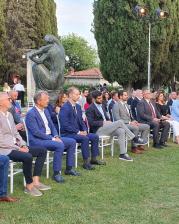