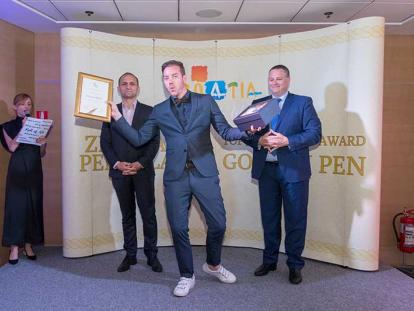 Sebastiaan Bedaux is a young freelance Belgian journalist who writes numerous travelogues for the leading Flemish daily newspapers and magazines. In his article ‘Time machine with my mother’ Sebastiaan took his mother to all the places which more than 30 years beforehand she visited with her father, describing the beauty of Dubrovnik and with the help of photographs from their family album from 30 years ago compared them with the current beauty of the city and the region.

Aurélie Bessaïh from RTBF Television and the proponent Sarah Yigit The programme ‘Les Belges du Bout du Monde’ (‘Belgians from the end of world’) from RTBT TV is a real ‘institution’ on national Belgian francophone television. In Croatia their host was the young Belgian, Sarah Yigit who found her new home in the Croatian capital. Sarah, who is also with us today, as a host to her guests from Belgium discovered her “new” city, or home, and during a tour revealed hidden corners of Zagreb and took her guests to some of her most favourite places in Croatia – to Opatija, to the islands of Cres and Krk, and also to Plitvice Lakes