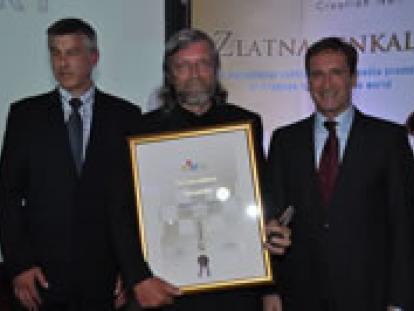 Mr. Mikuláš Sliacky was honored for his report "Nechoďte k moru. Choďte k moru "(Do not go to sea. Go to the sea) published in magazine FORBES SLOVENSKO. The feature, which was published in June 2011, portrays Croatia as a favorite destination of Slovak tourists, who mostly spend their holidays on the beach. The report encourages readers to spend their holiday in a much more varied and interesting manner - for example, on a yacht, or a bicycle or in a lighthouse. It recommends "Adriatic under the sails," as one of the best options to explore Croatian islands, national parks and towns from the far sea. The report specifies options provided by a sailing holiday as opposed to spending time on land - for example "diving on the islands and in bays that are inaccessible from land, exploring and taking pictures of new towns and hamlets on the islands including their monuments, tasting delicious food and wines of certain regions, swimming and bathing in the pristine bays." The author recommends a combination of sailing and cycling tourism on the islands, as well as recommending resting in lighthouses, which he describes in an attractive way. He concludes the report by saying: ... "Adriatic Sea is supposedly Slovak. And therefore, it is appropriate to explore it in other ways than just from the shore, just from its ends, so to speak. Let’s forget lying on the beach under parasols, move up from our continental position and go to the sea. As it is already ours ", by which he paraphrased the slogan of the Croatian Tourist Board on the Slovak market," Do you know where the Slovak sea is? Of course, in Croatia." Mikuláš Sliacky currently writes for the daily newspaper SME and the FORBES SLOVENSKO magazine. His personal publications include reporting journalism pieces and commentaries, but he also writes travel features and feuilletons. He is also a caricaturist and illustrator for newspapers and magazines. Mikuláš Sliacky participated in many national and international exhibitions and won several awards.