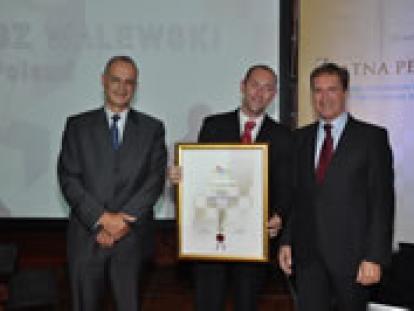 Mr. Łukasz Walewski is awarded for broadcasting four live reports on Zagreb and Plitvice Lakes in late August and early September 2011, within the very popular radio series "Zapraszamy do trojkl" on Polish Radio 3. These programs portrayed the lifestyle and atmosphere of Zagreb and the beauty of the Plitvice Lakes to the Polish listeners. The author interviewed the residents of Zagreb and asked them what they think of the European Union. He also spoke with numerous foreign tourists, among whom were Poles who had been living in Zagreb. Many Polish tourists took part in reporting back from the lakes, describing the impressions of their holiday in Croatia. Since 2008 Łukasz Walewski has constantly held the position of a political reporter in Poland and abroad, as well as being a presenter on Polish Radio 3. During his relatively short career, this future star of Polish journalism produced memorable reports, most of which were broadcast live from many countries around the world on the occasion of the most important cultural and political events. Łukasz Walewski began his journalistic career in 2007 as a student of international relations at the University of Łódź and worked as a journalist on the best-known TV news station, TVN 24 (2008), as well as the Polish Radio "Zet" in Warsaw. He has attended Erasmus University of Granada, Spain, and speaks fluent English, Spanish and German.