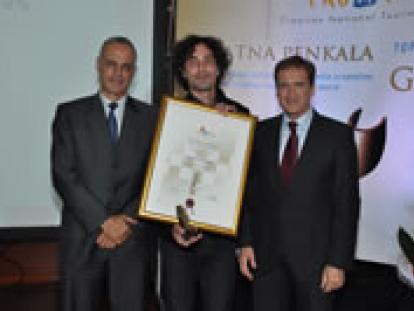 Mr. Martin Ježek is awarded for a series of reports on Croatia broadcast in the program "Ježkový Oči," on the radio station Česky rozhlas 2 Praha (Czech Radio 2 Prague). Martin Ježek (b. 1978) is a radio journalist and a foreign correspondent, whose interest in journalism started back in high school when he, as a student, ran a show in German language on radio Ramasari, in Bavarian Weiden. Following that, he held several posts, from radio Plzenj to Czech Radio 1 - Radiožurnál , where he worked as a member of the foreign editorial board specializing in the Adriatic countries and Eastern Europe. He worked as a correspondent for Czech Radio in the Balkans. For years, he participated in a seasonal summer project of the Czech Radio which was broadcast from the studio in Split. So far, he has aired a series of reports on Croatia, covering a variety of issues, from political to everyday life and service information. He is currently working as a presenter and reporter on Czech Radio 2 Prague, where he prepares his own daily column "Ježkovy Oči". He also broadcasts programs on Radio Praha and Radio Leonard. Mr. Martin Ježek speaks three foreign languages - English, German and Croatian, and loves traveling, jogging and cycling.