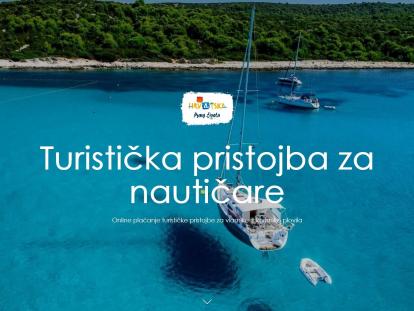 The Croatian National Tourist Board has launched a multilingual portal nautika.evisitor.hr which enables nautical visitors to pay their tourist tax online. The portal represents an additional way of paying nautical tourist tax, which until now was only paid only in port offices and branches.

"Nautical tourism is one of the most important Croatian tourist products for which the demand has increased due to market circumstances and is particularly in-demand due to the global coronavirus pandemic. This is also clear by the the number of sold permits, namely nautical vignettes, for which more than seven thousand have been sold since the beginning of the year through to July 15, which is 53 percent in comparison to the same period last year. We are also recording good results in the nautical charter segment, in which, according to the eCrew system, almost 200,000 overnight stays have been realized so far in July, which is close to 57 percent of last year's result. Given that the epidemiological recommendations of social distancing are still in force, in this way we contribute to the safety of boaters, but also of Croatian tourism workers", said the Director of the Croatian National Tourist Board, Kristjan Staničić.

Apart from the Croatian language, the portal is also available in English, German and Italian, and guides the user through the process of registering and paying the tourist tax in a simple and clear way. Also, the portal supports payments via all of the world's most used card brands, and after the tourist tax is paid, the boater will receive a confirmation to their e-mail address, which they must keep during their entire stay on board.

We remind you that in accordance with the Tourist Tax Act, boaters can pay the tourist tax according to the length of the vessel, and from the year 2020 according to the number of persons, or the number of nights, whichever is more favorable for them, which is usually the case during a short stay in the destination.