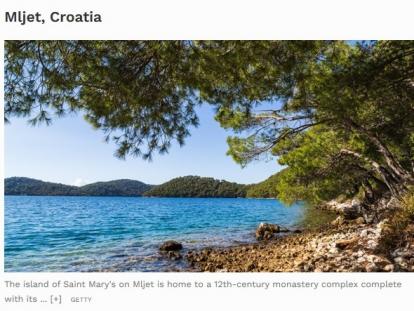 The American magazine Forbes has included the Croatian island of Mljet among the top 5 underrated Mediterranean islands for travelers who like to explore destinations “off the beaten path”, said Ina Rodin, Director of the Croatian National Tourist Board representative office in the United States.

The article states how many beautiful destinations on the Mediterranean coast remain unexplored, and the author of the article put together a list of five idyllic islands, perfect for those looking for escape from crowds and mass tourism.

“Coverage about Croatia and Croatian destinations in the most popular American media such as Forbes, The New York Times, The Washington Post and others confirm the popularity and position of our country as a desirable tourist destination on the American market. Although greater realization of tourist traffic from long-haul markets is currently difficult, our presence and visibility in the American media is important for future trends and travel”, noted the Director of the Croatian National Tourist Board Kristjan Staničić.

The island of Mljet is presented as the perfect place for all visitors looking for an active holiday, whether it is exploring Mljet National Park, swimming, kayaking or exploring numerous hiking and cycling trails on the island. Or, for all history and culture buffs, they can explore Polače, one of the oldest settlements on the island, famous for its Palace dating back to the Roman Empire. Along with Mljet, the list includes Greece's Syros, the Spanish island of Tabarca, the Kerkennah islands along the coast of Tunisia and the island of Kekova in Turkey.

We’d also like to note that the world's leading brand of tourist guides Lonely Planet in a recent article published an overview of four beautiful car routes in southeastern Europe where the route from Dubrovnik to Montenegro is singled out, which according to the author of the article is simply „breathtaking“.