easyJet has chosen Croatia as the destination of the year! 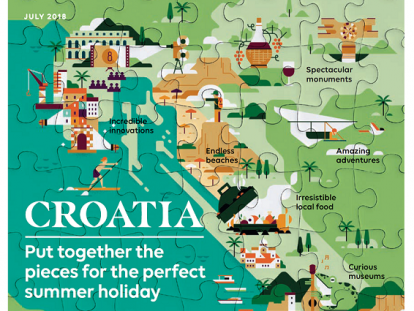 Europe’s leading airline easyJet has dedicated its July in-flight magazine exclusively to one country - Croatia. Traveller Magazine reaches over 6 million travellers every month and this month’s issue will contribute to the additional promotion of Croatian destinations to passengers from all over the world.

easyJet carries more than 1 million passengers between Croatia and Europe during the summer months. The airline flies on 49 routes connecting Croatian destinations such as Dubrovnik, Split, Pula and Zadar to a number of key European cities such as London, Berlin, Milan, Paris, Basel, Bristol and others.

easyJet carries over 82 million passengers annually, of which more than 13 million are travelling on business. easyJet flies 298 aircraft on more than 980 routes to 156 airports across 33 countries. More than 300 million Europeans live within one hour's drive of an easyJet airport.

easyJet aims to be a good corporate citizen, employing people on local contracts in eight countries across Europe in full compliance with national laws and recognising their trade unions. The airline supports a number of local charities and also has a corporate partnership with UNICEF which has raised over £10m for the most ovulnerable children since it was established in 2012.

The airline takes sustainability seriously. easyJet invests in the latest technology, operates efficiently and fills most of its seats which means that an easyJet passenger's carbon footprint is 22% less than a passenger on a traditional airline, flying the same aircraft on the same route.