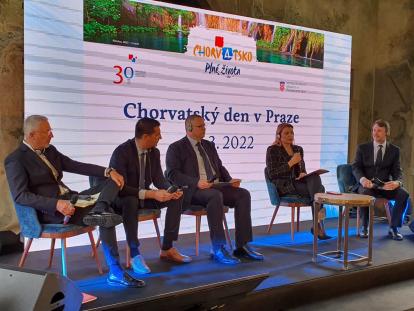 The Croatian National Tourist Board, in cooperation with the CNTB representative office in the Czech Republic, organized a special event called "Croatian Day in Prague" in the unique ambience of one of the most beautiful late Renaissance palaces in Prague, Martinický palác. This is a special event in one of the most important markets for Croatian tourism, which aims to present the overall Croatian tourist offer, expand existing cooperation with the most important Czech partners and define joint activities ahead of the upcoming season. The event was attended by the Minister of Tourism and Sports Nikolina Brnjac, the Director of the CNTB Kristjan Staničić and numerous dignitaries from the Czech tourism and public life, partners, media.

The interest in participating in the event exceeded all expectations, as the press conference was attended by more than 40 Czech journalists and representatives of the most popular media, while the business and working part of the program attracted about 50 entities and partners from the Czech tourism sector, among which are tour operators Fischer and České kormidlo, Czech carrier RegioJet and many others. During the press conference, Director Staničić gave a presentation of the overall tourism results of Croatia with reference to the results recorded from the Czech market and placed special emphasis on future trends and the position that Croatia wants to achieve in the Czech market.

"The Czech Republic is one of the top five markets from which we realize the largest tourist turnover, and the Czechs are our welcome and loyal guests. Further positioning of Croatia on the Czech market is a strategically important question because in the long run we want to maintain the position of one of the Czech's favourite foreign destinations. Although our country is currently most recognizable as a summer family destination, which is confirmed by the data on 60 percent of Czech tourists traveling to Croatia for summer vacations with family, in the future we want to take the position of year-round destination full of diversity, both on the coast and on the continent, but also as a destination that attracts tourists of different ages, especially young people, " said Director Staničić.

Minister Brnjac also addressed the gathered journalists, as she spoke about the further strategic and sustainable development of Croatian tourism, as well as Tomislav Fain on behalf of the Croatian Association of Travel Agencies and Neno Nizić on behalf of the Stories Hotel.

"Croatia is traditionally one of the favourite tourist destinations for Czech tourists, to which they are always happy to return. We are especially pleased with the fact that the Czech market is increasingly recognizing Croatia as a holiday destination not only during the summer months, as evidenced by the fact that since the beginning of this year, 98 percent of arrivals and 25 percent more overnight stays compared to the same period in 2019. Apart from the sea and beautiful nature, Croatia is becoming a destination of added value because it offers tourists a higher level of experience, which modern Czech tourists are increasingly looking for. In addition to the offer that is already well known to them, we are continuously developing the segment of luxury tourism. Given the growing demand for this segment of tourism, in the Czech market in the coming period we want to brand Croatia, among other things, as a tourist destination of modern luxury, which in addition to the usual forms offers personalization, evaluation of experiences and emotions and personal development through communication with local culture and community ", said Minister Brnjac, adding that more than 4 billion euros have been invested in Croatian tourism in recent years, and now we have another 2.2 billion kuna from the National Recovery and Resilience Plan.“

After the press conference, a working part of the program followed, which was attended by representatives of the Association of Croatian Travel Agencies (UHPA), Stories Hotel and Croatia Airlines, who also presented the new route introduced this year. Prague - Split, which will operate every Saturday from the beginning of June to the end of September.

"That Croatia is one of the favourite foreign destinations of the Czech Republic is shown by the tourist traffic realized in recent years, and their loyalty is especially pronounced during the last two and pandemic years. Namely, the Czechs recorded more than five million overnight stays last year, which represents an excellent 97 percent of the results from the record 2019. This confirms that we have recovered very quickly in this market, while this year, given the excellent bookings to-date, we expect even better results and growth in tourist traffic, i.e., complete recovery and return to pre-pandemic trends, " concluded Dubravko Miholić, director of the CNTB’s representative office in the Czech Republic, adding that the Czechs are increasingly looking for higher category accommodation facilities in hotels and camps, and that Croatian continental destinations are also growing in interest.

Let us add that last night, in the same space of the impressive Martinický palác, a special dinner was held, which, along with the Croatian delegation and representatives of the Croatian Embassy head by Ambassador Ljiljana Pancirov, was also attended by numerous owners, directors and representatives of Czech tour operators, agencies and tourist associations. Director Jan Herget was present on behalf of the Czech National Tourism Organization, and he announced more intensive cooperation between the two institutions, both in terms of exchanging knowledge, experiences and useful data from the eVisitor system. promotional appearances and activities in distant markets. 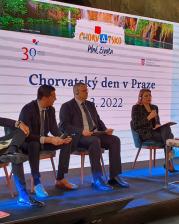 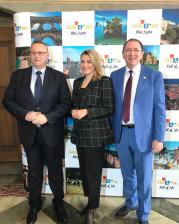 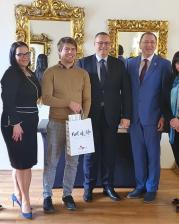 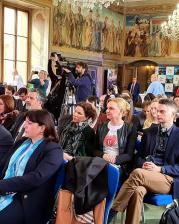