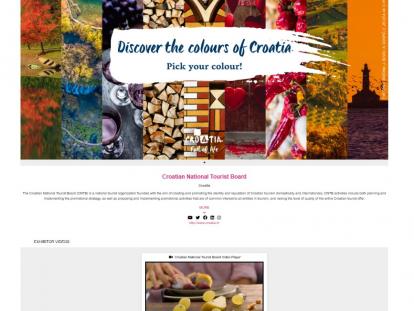 The Croatian National Tourist Board, together with 10 Croatian co-exhibitors, will present the Croatian tourism offer at one of the world's largest tourism fairs - World Travel Market (WTM) in London, which this year, after 40 years of continuous exhibitions, is being held virtually.  The fair will be held from November 9th to 11th daily from 7 am to 10 pm to cover all time zones, and participants will communicate through virtual platforms, conferences, workshops, and seminars.

"Despite all the challenges, Croatia was one of the most popular tourist destinations this year. In line with new trends, we focused on online promotion, creative solutions and services adapted to current circumstances. Participation in one of the largest tourism fairs in the world, albeit virtual, offers the opportunity to present Croatia as a safe destination with quality products, highlighting the country’s natural beauty, nautical offer, as well as culture and eno-gastronomy - which proved extremely popular this year. Croatia has shown that it can be a leader in innovation and development of offers that represent the future of tourism, while thinking of digital platforms and social networks by changing the way we communicate with tourists and present the destination in a new way to the world”, said Minister of Tourism and Sports Nikolina Brnjac.

"Most industry events and fair appearances through to the end of this year, but also at the beginning of next year will be held in a new, virtual form, so we have ensured our virtual presence at the world's most important tourism fair, WTM in London. It is important that, despite the current situation and travel restrictions, we maintain Croatia's presence in our important in-bound markets and inform everyone that we are a safe, well-prepared and high-quality tourist destination. The goal of participating in the fair is to maintain business contacts and relationships with key partners because it is one of the world's largest tourism fairs for B2B, which is important and confirmed by the fact that around 50 conferences will be held in virtual form as part of this year's WTM“, stated Kristjan Staničić, Director of the Croatian National Tourist Board, adding that in order to make Croatia more prominent at the WTM fair, co-exhibitors were co-financed for 50 percent of the amount of the virtual participation fee.

During the fair, the Croatian delegation led by Director Staničić will hold virtual meetings with representatives of important partners such as TUI UK, easyJet, SAGA, Jet2.com/Jet2 Holidays, Thomas Cook, British Airways, TravelZoo, TourRadar and others.

"Once the situation improves and restrictions start to ease, the British will start to travel again, and the final decision on travel will depend on consumer confidence. Health is now a top priority and the entire travel industry will need to adapt and define procedures that reconcile destination provisions with passenger needs, such as digitalization and contactless processes wherever possible. The safety of Croatia as a destination is one of the most important messages in communication with our guests, partners and media on the British market",said the Director of the CNTB Representative office in the UK, Darija Reić.

In addition to the basic package, which includes the promotion of the tourism offer via a virtual stand and the publication of promotional content on the WTM website, the Croatian National Tourist Board will additionally position its visibility through the Premium Deluxe package, which includes prominent visibility on the list of co-exhibitors, promotion through Facebook, Twitter, Instagram, YouTube, banners on the WTM website, as well as through advertising through sponsored visitor e-mail content. During business meetings, the WTM Virtual platform provides the possibility of sharing business cards, documentation, presentations and other content necessary for the best possible meeting outcome. The virtual presentation of Croatia will additionally be accompanied by certain parts of the promotional campaign "Discover The Colours of Croatia", which is already underway in the most important European markets and will last until mid-November. This particularly emphasizes the promotion of tourism products that are most in demand in these market circumstances, namely nature, nautical tourism, culture and eno-gastronomy.

In addition to the Croatian National Tourist Board as the main exhibitor, co-exhibitors who will ensure their visibility through the CNTB virtual stand are Adriatic Luxury Hotels, the Association of Small and Family Hotels, Croatia Airlines, Dubrovnik Tourist Board, Zagreb Tourist Board, Maistra Hospitality Group, Valamar Riviera d.d., Perfecta Travel, Plitvice Lakes and Uniline DM. Just to add that next year the Croatian tourism offer will be presented at other major world tourism fairs, especially at the most important in-bound markets for Croatian tourism such as Germany and fairs such as ITB, f.re.e., Boot, etc., Austria and Ferienmesse in Vienna, Italy and the TTG Trade fair in Rimini, the Netherlands and the Vakantiebeursttrade fair in Utrecht, and the United Kingdom and the WTM trade fair in London. 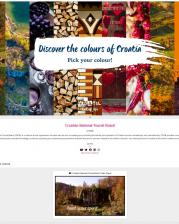 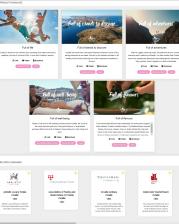 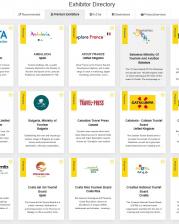