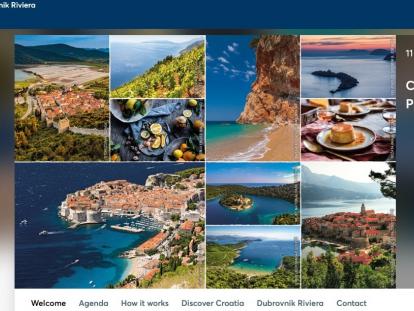 Due to current market circumstances and prescribed epidemiological measures both nationally and globally that have significantly affected tourism promotion channels, this year the Croatian National Tourist Board is launching a series of 30 virtual presentations and workshops, which will be held in 16 key source markets. Activities will be carried out through an online platform, and the first in a series of presentations will be held today for the Polish market in cooperation with the tourist boards of Dubrovnik-Neretva County, the town of Korčula and the municipality of Župa dubrovačka.

“Due to the inability to participate or organize classic fairs, tradeshows and workshops around the world, we decided to launch a series of our own virtual presentations and workshops that we will conduct independently and in cooperation with the network of local and regional tourist boards. In addition to the primary goal, which includes the promotion of Croatian tourism and the overall Croatian tourist offer, we want to gather by markets key foreign partners and agents in one place and convey to them the current health and safety situation in Croatia and our preparedness for the upcoming tourist season”, said the Director of the Croatian National Tourist Board Kristjan Staničić.

Most workshops and presentations are planned for the first half of the year, and in addition to promoting destinations and tourist products, epidemiological measures, safety of Croatian destinations and protocols for future travel to and within Croatia will be discussed.

In Poland, in addition to today's presentation, an additional seven presentations and workshops are scheduled to be held by June, where other county tourist boards will present i.e. Split-Dalmatia and Šibenik-Knin Counties, Kvarner, Zadar and Lika-Senj Counties, the city of Zagreb and Krapina-Zagorje County, the Cluster of Slavonia and Istria County, a business workshop for Polish and Croatian travel partners, operators and agents is also planned .

“Through virtual workshops and presentations to Polish tour operators and travel agents, we want to present a variety of Croatian regions, and the first in a series is the Dubrovnik region. All available 50 online slots were filled in a record time, which is proof that this activity is well received by the Polish tourism industry. We hope and believe that Poles will come to Croatia in large numbers this year and thus once again show that they are true friends and fans of our country”, said Agnieszka Puszczewicz, Director of the CNTB Representative Office in Poland.

We’d also like to note that the implementation of similar activities, in addition to the aforementioned market of Poland, is also planned on the markets of Germany, Austria, Slovenia, Italy, the Czech Republic, Slovakia, Hungary, the Netherlands, France, Great Britain, Belgium, Sweden, Russia, China and the USA.