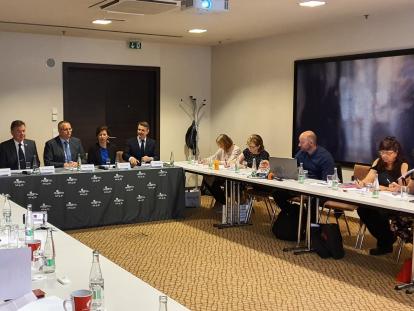 The Croatian National Tourist Board and the CNTB Representative office in the Czech Republic, which also covers Slovakia, organized a presentation of the Croatian tourist offer for the most influential Slovak media in the centre of Bratislava and a meeting with the key partners, tour operators and agencies from this important market for Croatian tourism. The event was attended by, among others, the Director of the CNTB Kristjan Staničić, the Director of the representative office Dubravko Miholić, as well as the Executive Director of the Association of Croatian Unique Hotels STORIES Antonija Urlić.

During the press conference, which was attended by 27 Slovak journalists and representatives of the most prominent media, Director Staničić presented the overall tourist results of Croatia with reference to the results achieved from the Slovak market, while special emphasis was placed on future trends and the position Croatia wants to occupy on the Slovak market.

"Slovakia is one of our top 10 inbound markets with the highest tourist turnover, and as the summer season is ahead of us, we wanted to position Croatia as one of the most sought after and successful Mediterranean tourist destinations. This was also an excellent opportunity for us to meet and talk with the most important partners about expanding existing cooperation in order to achieve the best possible results together this year as well. The current season, as well as the outlook for the rest of the year, give us optimism, Slovaks are our welcome and loyal guests and we expect a strong contribution of this market in our overall results", said Director Staničić, adding that long-term goals in this market include growth during shorter weekend trips and in the pre- and post-season periods, but also attracting a larger number of guests of different age groups with a special emphasis on young people.

After the press conference, Director Staničić held a presentation for 15 entities and partners from the Slovak tourism sector, including the largest tour operators and agencies such as SATUR, Globtour, Aquamarin, TIP travel, etc., and Antonija Urlić did the same for the Association of Croatian Unique hotels STORIES, which, as she said, are primarily intended for consumers who appreciate special, unique experiences and who are looking for high quality service.

"We are more than satisfied with the trends and results achieved on the Slovak market so far this year. Namely, the structure of Slovak guests who visit Croatian destinations is slowly changing, so we have more and more people who are looking for a quality service that they are willing to pay for. The indicators of tourist traffic are also optimistic, according to which Slovaks have achieved about 32 percent more overnights so far this year than in the same period in 2019. By the end of the year, we want to maintain this level of tourist traffic, i.e. we want to exceed the pre-pandemic result because it will mean a complete recovery of Croatia in the important Slovak market", concluded Dubravko Miholić, adding that Slovaks spent most nights in Zagreb, Zadar, Poreč and Rovinj.

We should add that at the very beginning of the program, the Ambassador of the Republic of Croatia to the Slovak Republic, Aleksandar Heina, greeted all present, while the meeting with Slovak partners was attended by Darius Krajčir, Mayor of Devinska Nova Ves, which is part of the city of Bratislava. The 33rd Festival of Croatian Culture will be held on June 19th. We remind you that in this municipality there is a Museum of Croatian Culture, but also Vukovarska Street, which makes Bratislava the only capital of an EU member state in which one street is named after the Croatian town of heroes - Vukovar.