Croatia is the leading foreign destination in Austria! 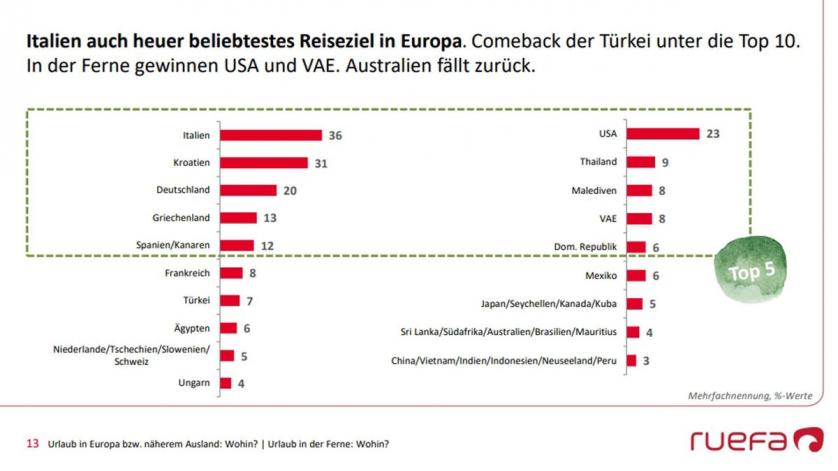 In anticipation of the summer high season, Austrian travel organizers conducted market research according to which Croatia is at the very top of the most sought-after foreign destinations by Austrians. Namely, the travel organizer Gruber Reisen conducted a survey among its clients and customers, i.e. 1,200 respondents, entitled "Travel Barometer in 2022", according to which Croatia is the leading and most sought-after destination on the Austrian market.

“Austria is one of the most important in-bound markets for Croatian tourism, and according to the data from the survey according to which almost 95 percent of Austrians said they want to spend their vacation within Europe, which is yet another reason for optimism. Other positive indicators according to which almost every second person in the Austrian market wants to travel more so than last year, and at the same time they want to discover new destinations, cultural and eno-gastronomic offer, as well as active tourism”, said Branimir Tončinić, Director of the CNTB Representative office in Austria, adding that health and safety in the destination remains an important aspect when booking a trip.

The results of the survey also show that the will and desire of Austrians to travel is great given that 53 percent of respondents have already booked a trip this year. At the same time, about 65 percent of respondents said that they prefer a beach holiday, i.e. the sun and the sea as a motive for visiting, while visits to cities are becoming more interesting and are in second place in terms of expressed interest. Let us add that the results of this research were also conveyed by the popular online professional magazine Traveler Online.

The survey entitled "Ruefa Reisekompass in 2022" was also conducted by the well-known travel organizer Ruefa Reisen GmbH on a sample of 1,500 respondents. According to the obtained results, Croatia ranked a high second place of the most sought-after destinations on the Austrian market, just behind the leading Italy, and ahead of countries such as Germany, Greece and Spain. The results of this research were also shared by a number of popular online professional magazines such as Traveler Online, Tip Online and Ots.

“The results of this research, as well as the feedback of our partners from other important markets such as Germany, Slovenia, Poland and the Czech Republic, confirm that the interest in travel and Croatia is very pronounced. We expect the first large influx of foreign guests for Easter, especially from nearby markets where Croatian destinations are easily accessible by road”, said the Director of the Croatian National Tourist Board Kristjan Staničić.