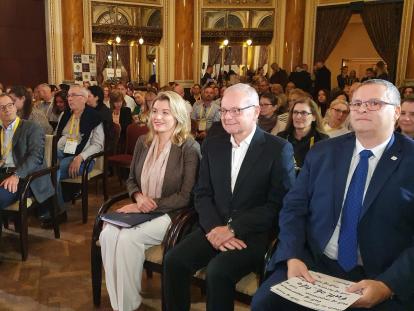 The annual meeting of the ADAC Jahrestagung 2022, the German automobile club with more than 20 million members, opened today in Zagreb at the Esplanade Zagreb Hotel. The opening of the meeting, organized by the Croatian National Tourist Board, CNTB Branch in Munich with the support of the Zagreb Tourist Board, was attended by Nikolina Brnjac, Minister of Tourism and Sports, Kristjan Staničić, Director of the CNTB, and more than 200 agents and directors of 18 regional ADAC clubs from all over Germany.

This multi-day meeting will be held in Zagreb from November 18 to 21, 2022. Introductory and welcoming speeches were given by Aquilin Schömig and Andreas Neumann, general directors of ADAC Reisevertrieb GmbH, Karlheinz Jungbeck, ADAC's president for tourism, director of the CNTB Representative Office in Germany, Romeo Draghicchio and Director Staničić as well as Minister Brnjac.

„Germany is our most important tourist market, from which we generate the largest tourist traffic, i.e. which records a share of about 24 percent of the total realized tourist overnights in Croatia. This is precisely why joint cooperation with ADAC is an obvious and important prerequisite in realizing the potential that is additionally opening up for us on the German market. So far, we have implemented numerous joint promotional activities that played an important role in positioning Croatia as an ideal vacation destination among Germans, and we will continue to act in this direction in the future", said Director Staničić, emphasizing that this year, Germans made the most arrivals and overnights in Istria, Kvarner as well as in Split-Dalmatia and Zadar counties.

Minister Brnjac highlighted sustainability as an important area of further cooperation between Croatian tourism and ADAC. "This year, Zagreb is hosting the annual meeting of ADAC, the largest automobile club in Germany and Europe, which is a great opportunity for an even better positioning of Croatia on the German tourist market, from which 14 percent more arrivals and 18 percent more overnights have been achieved in the current part of the year compared to the same period in 2019. Equally pleasing is the increased interest of German guests in the continental counties, where we achieved a 25 percent increase in overnight stays. These excellent indicators are, among other things, the result of our quality cooperation based on the Memorandum of Understanding between the Ministry of Tourism and Sports and ADAC, which further encouraged the exchange of ideas and business interactions between ADAC and Croatian tourism stakeholders. ADAC recognizes the quality and diversity of the Croatian tourist offer in all segments, especially the quality of our camping offer, whose prestigious list of the best European campsites this year included as many as 149 Croatian campsites, and 21 Croatian campsites received the Superplatz designation as the highest quality award. Next year, Croatia will achieve its two important strategic goals - entry into the Schengen area and the Eurozone, which will have a positive effect on tourists from Germany in the context of travel and stay, and Croatian tourism will thereby further increase its competitiveness in the European environment", said Minister Brnjac.

During the multi-day program of the meeting, business workshops, lectures and presentations will be held, and the Croatian National Tourist Board has additionally enabled representatives of regional tourist boards and tourist clusters to meet with representatives of ADAC and travel agencies.

The importance of ADAC and its role as a strategic partner of Croatian tourism is also demonstrated by the excellent effects of joint promotional activities carried out so far, which produced very visible and measurable results. Also, it is an association that Germans wholly trust and which is often the first address for information needed for travel planning, which is particularly important for Croatia as one of the favourite car destinations of German travel enthusiasts.

Let us add that the good position of our country on the German market is also confirmed by the latest available data from the German Institute for Tourism (FUR), according to which Croatia ranks a high 4th place as the most popular foreign destination for Germans, while in the area of Bavaria our country is in an excellent 2nd place. 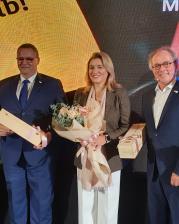 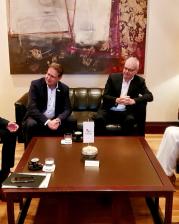