The German research institute FUR (Forschungsgemeinschaft Urlaub und Reisen e.V.) recently published a regular annual survey “Reiseanalyse” for 2021, according to which Croatia, for the first time ranked fourth place among the top foreign destinations among Germans,” reported Romeo Draghicchio, Director of the Croatian National Tourist Board office in Germany.

“The results of this research show a very good position of our country in the German tourism market. That this is the case is confirmed by the fact that last year Croatia was the only destination that increased its market share compared to 2019,” said Draghicchio, adding that only Spain, Italy and Turkey are ahead of Croatia, but with a reduced gap, while Austria took fifth place.

As pointed out by the FUR institute, the first signs of recovery of the travel industry were visible last year, which is confirmed by 55 million trips made from the German market, which is nine percent more than in 2020. As for the motives for traveling in 2022, the interest in sun and sea, entertainment and relaxation is growing, and the results further show that most Germans want their vacation to be environmentally sustainable (47%) and socially acceptable (64%).

“Germany is our most important emitting market, with more than 21 million overnight stays last year. Considering that a total of more than 84 million overnight stays were recorded in Croatia last year, it is clear that Germany has a high 25 percent share in the overall results. These results confirm our good promotional strategy we have in the German market, but also the further potential for achieving even better tourism results in the future,” said Croatian National Tourist Board director Kristjan Staničić.

That Croatia is among the most popular destinations in Germany is also confirmed by one of the leading German travel magazines, GEO Saison, which dedicated the March issue to Croatia as an attractive and high-quality tourist destination. Within the magazine, readers can find a number of concrete ideas and suggestions for a vacation, from Istria and Kvarner to central and southern Dalmatia, while a special and most extensive part of the report is dedicated to the island of Mljet. 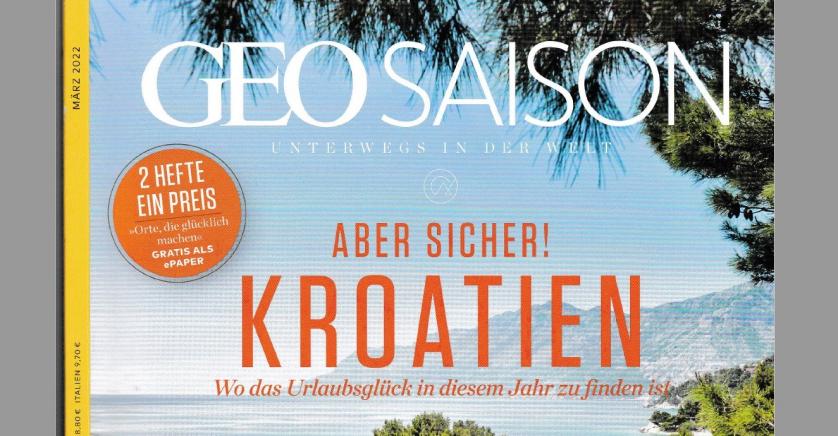