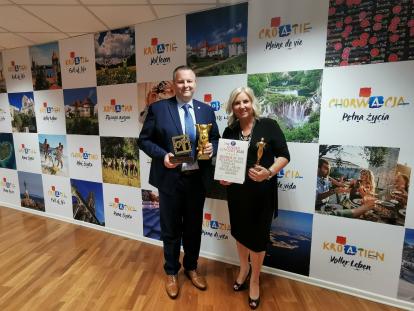 The promotional film Croatia Your Next Filming Destination, shot in cooperation between the Croatian National Tourist Board and the production company Balduči film, won second place in the "Region International" category in March this year at the jubilee, 20th edition of this prestigious The Golden City Gate festival. This festival is normally held during the ITB tourist fair in Berlin, and as the fair and the award ceremony did not take place due to the situation with the coronavirus, Balduči film director Spomenka Saraga presented the award from Berlin to the CNTB director Kristjan Staničić.

„We are extremely proud of the success of the film, which promotes Croatian film locations and additionally highlights Croatia as an attractive filming destination and positions it on the map of world production centers. Despite the fact that the corona virus pandemic has stopped the production momentum across the globe, as well as in Croatia, we are pleased that, due to the good epidemiological situation, our country is perceived in international production circles as a safe country to start film production“, said the CNTB director Kristjan Staničić, adding that according to information from HAVC (the Croatian Audiovisual Centre), the delayed filming of foreign projects in Croatia is expected to start at the end of the summer, while the filming of domestic projects started last week, in line with the recommended precautions.

„The award from Berlin is a great success if we take into account that the competition included films from all over the world, from famous world destinations, and they were evaluated by as many as 45 members of the jury of various professions. The festival awards films in 18 categories, and the best are chosen by an international jury made up of representatives from various sectors - from business professionals to artists. Every international award makes us especially happy and gives us greater motivation to continue along this path, and since our films have been submited to several other festivals, we are looking forward to the results of autumn festivals", said the screenwriter and producer of the film Spomenka Saraga.

The promotional film Croatia Your Next Filming Destination, in addition to winning silver in Berlin, recently won two gold awards at the prestigious American festival The Telly Awards, which was held for the 41st time this year, while at the Riga International Film Festival the film won the main jury award.

Good trends on the Croatian film scene are also confirmed by the Croatian Audiovisual Centre, which says that the interest of foreign producers in filming in Croatia is really great, especially for locations on the coast, but also for "undiscovered" locations such as Kijevo, Knin, Glina, Obrovac, Zir and Petrova Gora, as well as already well-known locations such as Rovinj, Dubrovnik, Rijeka, Trogir, Pag and Zagreb.