Big interest in Slavonia as an incentive destination 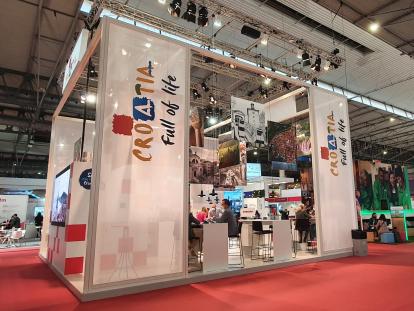 The Croatian National Tourist Board is presenting the Croatian tourist offer as part of the IBTM World congress Fair, which ends in Barcelona today. After last year’s online edition, the fair is being held live again this year, so numerous meetings of domestic and foreign partners from the business travel segment have been held. Namely, in addition to the Croatian National Tourist Board as the main exhibitor, seven co-exhibitors present their offer at the fair, including the congress offices of Zagreb, Dubrovnik and Opatija as well as Valamar, Liburnia Hotels & Villas, Le Meridien Lav Split and Spektar putovanja.

“Business travel is one of the segments of tourism that has suffered the greatest losses during the global pandemic. This year we are witnessing its gradual recovery, fairs have started to be held live, and the realisation of business trips and the organisation of international business gatherings is becoming more frequent. That is why our presence at the congress fair in Barcelona, which is the main meeting place of international supply and demand in the segment of MICE tourism, is very important”, said the Director of the Croatian National Tourist Board, Kristjan Staničić, adding that further recovery in business travel to Croatia is expected next year, especially in the pre and post-season periods.

Namely, according to the first feedback from the IBTM World in Barcelona, many partners from the Polish and Ukrainian markets are interested in creating additional offers with Croatian destinations in the business travel segment, while Turkish partners announce great interest in Advent programs in Croatia. Also, exceptional interest during the fair was expressed for Slavonia as an incentive destination that represents something new and different on the market and which is adorned with a very rich and authentic offer.

Croatian partners, who have already received concrete inquiries for 2022, are also satisfied with the performance at the congress fair in Barcelona, during which the main advantages of Croatia, as a business tourism destination, could be quality infrastructure, proximity and accessibility, historical heritage, nature and top eno-gastronomy.

The IBTM World congress fair presents more than 3,000 destinations and providers, who have the opportunity for business meetings with more than 15,000 professionals from the business travel industry. The IBTM Barcelona congress fair, along with the IMEX Frankfurt fair, is the most important in Europe as well as in the world.