Peljesac Bridge is a new tourist attraction, promoting interest in the south 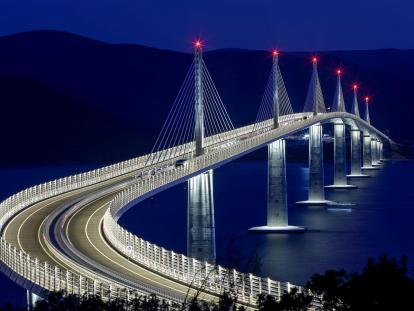 In addition to enabling a road connection to and from the south of Croatia, the Pelješac Bridge is also becoming a new tourist attraction in its own right, which foreign media are already reporting on, and will also play a part in the country's tourism promotion and is expected to further stimulate tourist demand for the south, stated the Croatian National Tourist Board Director, Mr. Kristjan Staničić for Hina.

"The bridge will certainly be a new tourist attraction, both for sailors, for whom sailing under the bridge will be a special experience, as well as for many travellers and tourists who can enjoy a wonderful view of the bridge from the surrounding viewpoints and roads. Just how much the bridge itself will be highlighted in the creation of special offers, tours, souvenirs and other products depends on the destinations themselves and the businesses and service providers operating in that region, and the CNTB will, as done to date , use the bridge as part of promotional and informational campaigns," said Staničić on Tuesday ahead of the opening of the Pelješac Bridge.

Reducing the dependence of tourism on air transport

Director Staničić said that it is still too early to talk about the direct and definitive impact the bridge will have on the tourism numbers in destinations in the far south, but he believes that it is quite certain that the bridge will reduce the dependence of the south and its tourism on air traffic.

"Although Great Britain and the USA are among the most important tourist markets for the Dubrovnik-Neretva County, the markets of Germany, Poland, France and Slovenia are also very important, as well as the domestic market, so a direct impact of the bridge on greater demand and arrivals from these markets is also expected. This fits into the image of Croatia as a very well-positioned and recognized high-quality car destination, to which the Pelješac Bridge additionally contributes" said Staničić.

That the bridge attracts tourists, as well as media from around the world, was also evident during last week's visit by the team journalists from the leading European news channel Euronews, which the CNTB supported as they filmed the bridge along with other tourism topics and the offer of the Dubrovnik-Neretva County, and will broadcast the report on Euronews, which is available to about 70 percent of households in Europe or about 145 million people.

Regarding tourism, Staničić also emphasizes that, in addition to the better road accessibility to Dubrovnik and the entire Pelješac peninsula, the bridge also means that traveling to that part of the country will be much more convenient and pleasant from now on.

"We are especially proud of how the bridge, with its complex and unique design, has changed the view of the Bay of Mali Ston, which will certainly benefit us in the preparation of attractive and high-quality promotional materials and content for foreign markets" said Staničić.

The Dubrovnik-Neretva County nears the tourist numbers from 2019.

In conclusion, tourist traffic data in the Dubrovnik-Neretva County, which to-date accounts for 838 thousand tourists and about 3.6 million overnights, is 141 or 108 percent better than in the same period in 2021. While compared to the record from 2019, it is at 70 percent of arrivals and about 81 percent of tourist overnights.

Only in July to-date, close to 305 thousand tourists stayed in that county, achieving more than 1.5 million overnights, what is increase of 48 and 41 percent compared to 2021, and compared to the same days in July 2019, this is 87 percent of results in arrivals and about 92 percent of results in overnights. CNTB expects similar trends to continue until the end of summer and through to yearend.